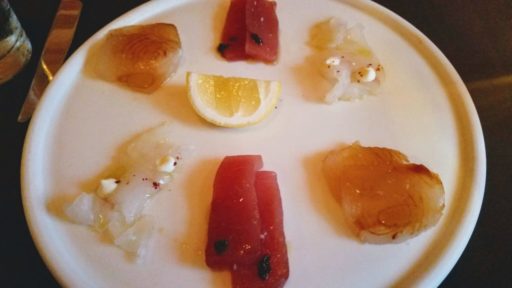 I had been to Bar Casa Vale once before and liked it well enough.  But the announcement from its parent company that a second restaurant, with a focus on sustainable seafood was opening up next door really grabbed my attention. It’s name was to be Erizo.  It sounded like a fun place to eat in Portland.

Usually it is the fancy restaurant that opens first and the casual cousin comes next, to make the chef more accessible to the masses.  But hey, this is Portland, and things don’t happen in any particular order.  Someone creative gets an idea, goes with it and often, they are successful doing it their way.

Aren’t you curious about Erizo? Mysteriously tucked away at Bar Casa Vale

To be honest, I didn’t know exactly what to expect.  Would it be another Roe or Holdfast?  Maybe.  Or then again, probably not.

After checking in at the happening Bar Casa Vale, I was taken to Erizo, a tranquil space that hid behind a blue curtain, down the hall.  It was intimate, with a capacity of no more than two dozen people.  Any space that utilizes a lot of wood, already has scored points in my book, before I even look at the menu.

The tasting menu is comprised of many delectable bites

Well, speaking of the menu.  Erizo’s is a tasting menu with 20 dishes.  Served in 10 courses.

Even June evenings can be chilly, and the dashi broth with roasted grains appropriately warmed my insides.

The sardine, which was harvested from Half Moon Bay, south of San Francisco was served rolled up on a skewer.  The inside was tender and the outside crispy.  Simple perfection in a bundle.

Then the dry aged fish definitely got my taste buds dancing.  Drying the fish intensifies the flavor just like drying mushrooms or jerky.  The aged tuna, flounder and wahoo had a slightly pungent flavor.  Since seafood is delicate, the aging process happens quickly.  17 days at the maximum.

If I had to pick a favorite, it would be the platter of bivalves.  The chef would not limit himself to oysters, not that I’d hold it against him if he did!  The variety in size was fun.  They ranged from a tiny limpet to a palm sized horse clam and other sizes in between, each paired sparingly with a vegetable, which in this case acted like a condiment.  Just enough to get the essence of green garlic or winter melon.

Most of the seafood was served raw or chilled.  Although the chef built the meal to add some gravity and warmth with heartier dishes toward the end.  And the brioche with butter was the correct choice. The presentation was simple and almost rustic.

It wasn’t long before Erizo was given accolades

Some of this seafood came from California, some from Washington, but a good portion came from Oregon.  And it gets better than that.  The chef goes out to the Oregon coast every week and harvests the seafood himself.

Which in my mind, makes a meal at Erizo truly a labor of love and a unique Portland dining experience.

And now that Eater has proclaimed Erizo to be one of the 16 best new restaurants in the US in 2019, I am sure that it will become one of the places to eat in Portland.

For another re-envisioned seafood meal, check out Holdfast. It is a completely different experience, but equally as delightful. I wrote about it here!