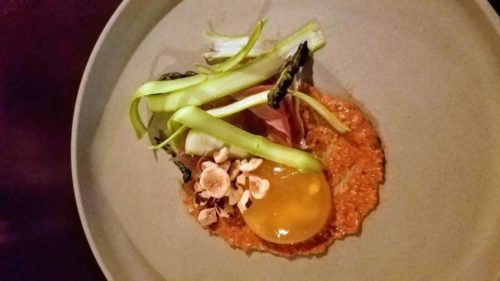 I love a good backstory and Holdfast Dining has all sorts, including the pop-up birth.  Currently the open kitchen seating is housed in the tasting room at Fausse Piste Winery.  Will went to culinary school with the man who owns the winery.  As befits a winery, the restaurant is filled with large barrels, as well as an old press, that, if I understood properly, is still in use in “the season”.  So its roots are woven into the ambiance of the place, which is very Portlandesque, I may add.  The winery and restaurant are tucked away in part of a non-remarkable looking building in close-in southeast, probably a building that had its roots in an industrial endeavor.

Holdfast,  evolved from a pop-up created by chef Will Preish over the past three years.  Unfortunately I only heard of it in the last six months.  I must have been busy chowing down on other worthy endeavors.  But you can be sure that I am delighted to be part of Holdfast’s 522nd dinner.  I know this, because they put that info on the menu for May 19th.

A place Holdfast can call their own

Although let’s note that Holdfast Dining moved in the summer of 2018 to its own space.  Now Holdfast, and its upscale associated bar, Deadshot calls Ladd’s Addition home.  Deadshot had only been open Mondays, no reservations required.  Now Deadshot is open 7 nights a week.  If you are only going to get one thing, make it the nachos made form pork tendons, smothered in shredded brisket.

Something else that makes Holdfast unique is that there are only three staff, who do all the cooking, plating, serving, and dishwashing.  Joel and Will are the chefs and restaurateurs.  And the third is Jeff, the sommelier.  He brings so much life to the wine served, that listening to the tales of where it comes from is half the fun.  We vicariously traveled to lava strewn islands in the Mediterranean.   From there we were off to the country of Georgia where the wine is fermented in kvevri, large earthenware containers buried in the ground.  And on from there for each course.

Although I immensely enjoyed the travelogue that went with Jeff’s wine pairings, I opted for the juice pairing, which was a mosaic of flavors and colors unto itself.  Yuzade was a lemonade (sour and slightly sweet) made of the canary yellow yuzu fruit.  I could not decide if my favorite was the earthy and pungent beet, pomegranate, ginger or the dry rhubarb and orange blossom.  They were all creative and well balanced.

Well let’s get on to the food, shall we.

It is really what makes Holdfast one of the best places to eat in Portland. Holdfast is defined as a stalked organ by which a seaweed or related plant is attached to a substrate.  So it makes sense that the ten course fixed menu had a focus on seafood.  I am a HUGE lover of seafood, so I was already a fan of the nourishment to come, before I even took the first bite.

The chefs get a ten for creativity and the plating is up there as well.  It takes a lot to think of creating a dish with razor clams, rhubarb, and green strawberries.  The razor clams were smoked, the green strawberries were pickled, and the rhubarb was made into a sorbet that was shaped like a flat disc served over the other two.  We needed to break the ice and taste all three components to get the full effect.

Each dish was a standalone masterpiece – so light and delicate.  A few courses in, I was thinking I would not be full, unless a heavier dish was served.  No sooner than I had that thought and a more substantial course was served.  Egg yolk, asparagus and country ham skillfully arranged with a spoonful of romesco sauce.  At first glance the egg yolk looked raw, but it was not.  They confitted it in butter and it weighed more once it was done, than while it was still raw – meaning the egg yolk absorbed the butter , yum!

And lest I forget, Holdfast’s legendary brown bread

The asparagus was served shaved raw, as well as grilled, although it was actually charred with a blow torch.  They do a nice job of playing on the interesting twist of having one ingredient served multiple ways in dish.  We were also given a small piece of brown bread on the side.  The bread was modeled after a dark bread you may find in Scandinavia and probably reflects Will’s recent stint cooking in Denmark and Iceland.  Delightfully it was steamed, not baked, which imparted a moist texture to it.  It was dense, but not too heavy.

Switching gears to dessert.  The cornbread madeleine did not go unnoticed, nor did the yogurt with honey served three ways (I was not even aware powdered honey existed).  Yet the pine needle panna cotta stole the show for me.  They garnished it with green almonds which still had water inside of them (like a young coconut yields water).  Cooked strawberries, dehydrated lemon meringue, and lemon balm leaves gracefully adorned the bowl.

At evening’s end we were properly full and felt very comfortable.  Time and money aside, this was the type of meal I could physically eat every night.  It was so clean, with a great degree of taste bud stimulation, yet nothing was overdone. My fondest fantasy would be for Joel and Will to host a special Portland by Mouth tour!

The chefs and sommelier relaxed after they served the last dish and switched gears to answering questions and chatting.  No, they don’t cook like this every night at home.  Yes, the menu is in a constant state of rotation.  Every two weeks, eight of the ten dishes are changed.  But sometimes something is available or not available and other adjustments need to be made in short order.

And yes, just in case you were wondering – they sent each of us home with a mini-loaf of brown bread, with the recipe neatly tucked inside of the metal tin.

If you go as gaga as I do over re-envisioned seafood, then you must check out Erizo. I wrote about it here!

One thought on “Holdfast Dining — the Place for Re-envisioned Seafood”