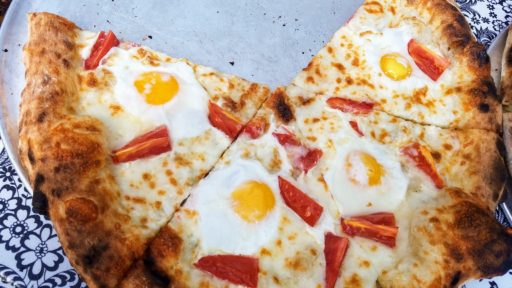 Pizza aficionados are very attached to their favorite type of pizza.  I grew up in NY and gorged on pizza for a couple decades, with the occasional hiatus to gorge on bagels, egg creams, and pastrami sandwiches.  So, I admittedly have a bias for New York pizza.  But when a wave of rationality sweeps over me, I am the first to admit there are other contenders for excellent styles of pizza. And Portland’s pizza is worth taking a closer look at.

Did you know Portland’s pizza scene is highly respected?

Portland does not have its own style pizza unique to the region.  Instead, chefs use various styles as springboards and blend that with Pacific Northwest ingredients, to create some unique and very fine tasting pies.

The Kerns Restaurant Row, NE 28th Ave has an embarrassment of riches when it comes to great food, including pizza.  And for this, I am grateful.  While the core of Restaurant Row is from Burnside to Glisan, it more widely is considered to run from Stark to Sandy.

So, let’s get into the nitty gritty of pizza!

Now this is about as close to New York pizza as you will find in Portland.  Some places claim to be NY style and often they don’t measure up.  But Baby Doll Pizza does.  The owner is from New Jersey, so that explains a lot.  The crust is thin, the toppings are basic, the cheese is abundant, and you can buy it by the slice.  Now what else could I want out of a piece of pizza?

For pizza, sticking with the basics like pepperoni or sausage is best.  When establishments start throwing brie and pear on potato flour dough, they have strayed too far to still be considered pizza.  The roof of my mouth should burn from all the hot, melted mozzarella.  Baby Doll is open for lunch and dinner and late night snack (2am most nights, 3am on weekends).  The only thing better than a slice of well executed pizza for lunch is a slice of well executed pizza at 2am! It is at the south end of the Kerns Resturant Row, on SE 28th and Stark.

There’s a reason Ken’s Artisan Pizza is revered throughout Portland and there is always a line to sit down at his restaurant.  It’s delicious and soul nourishing!  Ken’s Neapolitan style pizza also has a thin crust, although the edges, where the toppings don’t cover, can puff up.  Ken Forkish is a baker extraordinaire and here, it’s all about taking care of the dough.  I love to sit at the bar and then turn around and watch the action at the wood fired oven.  Which I may add, is the only cooking method at the restaurant.  Cooked veggie dishes are tended to in pans at the back of the oven.

In addition, there is a certain magic in watching the three men work in sync pumping out sizzling pizzas all night long.  One cook throws the dough and preps the pizza.  The next cook tends the pizza, which needs but a few minutes to cook, in the 800 plus degree oven.  And the third cook cuts the pizza and gets it to the wait staff in moments flat.  They open at 5pm (4pm on weekends) and you can only order a whole pie, so plan accordingly for dinner. You can find them on the Kerns Restaurant Row on SE 28th and Pine.

How about a deep dish Chicago style pizza made with a cornmeal crust.  Which is to say, it is not a strict interpretation of Chicago pizza and, in this case, that works to Dove Vivi’s advantage. The crust is a creative twist and to my taste buds it has a tasty buttery flavor.  The toppings are mostly traditional, which is a plus.  Toppings are prepared in house daily from local ingredients, and the proof is in the pudding.

There are a couple vegan options.  And you can get pies by the half, so carnivores, vegetarians and vegans alike can find peace here.  My only suggestion is to order a side of roasted tomatoes.  I like a tomato rich pizza and feel like the extra balances out the flavors of the dough and other toppings.  They don’t take reservations, so there is often a line.  You can always put your name on a list and scope out the rest of the Kerns Restaurant Row to figure out where you are going to have dessert. They are at the corner of NE 28th and Glisan, in the mini strip mall.

Portland’s pizza is wonderful, but speaking of Dessert . . . . .

By no means an exhaustive list, but check out the chocolate Cuban cigars at Pambiche, the many chocolate treats at Alma Chocolate, turmeric coconut vegan ice cream at Fifty Licks, the pint sized marionberry pie at The Pie Spot, or macarons at the French patisserie Pix.