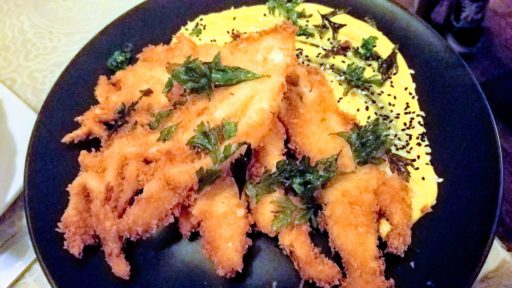 I laughed really hard when I read the introduction to Kachka chef, Bonnie Morales’ cookbook, Kachka: A Return to Russian Cooking.  She tells the story of when she and her husband Israel were opening Kachka in 2013 and they interfaced with contractors, inspectors, vendors, food writers, banks, potential employees.  In short, in every discussion, once she mentioned her restaurant to be would serve food from the former Soviet Union, she was met with blank stares, long pauses and confusion.

For most of us, Russian cuisine is synonymous with borscht, which is essentially beet soup.  Yet, when we consider that the former Soviet Union spans eleven time zones (practically halfway around the globe!), and is about 15% the earth’s landmass, it only stands to reason that people over such a large region ate a lot more than beets!  The USSR included Russia and about a dozen smaller countries surrounding Russia.  And all of the countries cuisines impact one way or another the food we enjoy at Kachka.

Like so many chefs, Bonnie delivers food that may stray from the strictest of interpretations of her culture.  Instead, she delivers dishes that evolved from the way grandma made them, blended with years of personal experimentation and tinkering, overlaid with the influence of seasonal and local ingredients.  Bonnie attended culinary school and her expertise and precision in the kitchen is on display in every dish.  While Kachka is casual enough for dinner any night (if you can find an open seat), the food is refined enough that you will know you just had a truly special meal.

When I bring guests to Kachka on the Bustling Buckman Food Tour, they often leave remarking about it being one of the most unique dining experiences they have ever had.

So let’s get back to What’s Russian Cuisine?

The cuisine is more than the just the food, it’s a way of eating.  Bonnie’s family was always hosting meals and this is reflected in the hospitality you experience at Kachka.  And creating a spread of appetizers, zakuski, to share with the whole table is another element of the Russian way of eating.  And for sure, you and your friends can have the zakuski experience at Kachka and let them fill your table with the appetizers of choice.  And then drinking!  Lest we not forget a proper toast with vodka (or non-alcoholic drink of choice).  A classic toast follows a short story or antidote and subsequent toasts are brief and “to your health”.  The important component here is that everyone partakes at the same time.

You can also order zakuski a la carte.  The most popular one and one of Portland’s iconic dishes is Herring Under a Fur Coat. It is a layered salad, with pickled herring and cold, cooked root vegetables, with a healthy dose of mayonnaise.  House made pickled vegetables like sauerkraut would be another example of zakuski.  But don’t stop there.  Cauliflower, mushrooms, peppers and others are equally delicious when pickled.

Soups are extoled in Russian cuisine

And with good reason.  Soups are nourishing and can adapt to be hearty or light, veggie or meat or grain based, as well as cold or hot.  Kachka’s borsht includes braised short rib and a dab of smetlana (the Russian version of sour cream).  And in the winter, it’s a must have.  In the summer, they feature a cold Latvian soup based on whey.  It includes cucumber and dill and I guess I will go so far as to say, it’s a must have too!

Pelmeni is the Russian take on a dumpling

Almost every culture has a dumpling of some sort.  A wrapping made of a carbohydrate that encases some protein or veggies.  It was peasant food to feed the masses.  Although when you eat Kachka’s delicious pelmeni stuffed with locally sourced meats or house made farmers cheese, I assure you that you will not feel like a peasant.  And if you order it swimming in delicious broth, then you may actually feel like royalty.

The main course is heartier and meat based.  At Kachka, this can go in SO many directions.  And the menu is ever changing.  Cabbage rolls stuffed with meat, beef stroganoff and chicken kiev are some more popular dishes you may already be familiar with, even if you didn’t associate them with Russian cuisine.  What’s on tap at Kachka on any given evening can be more adventurous.  I have had chicken heart skewers with a rhubarb sauce.  And deep-fried lamb pies or kasha stuffed suckling pig may appear on the menu (and do appear in the cookbook).

Cheeses also make an appearance in Russian cuisine.  While there may not be endless varieties as there are in French or Italian cuisine, they are mild and lend themselves to being versatile.  Thus they marry well with other ingredients and make their way into lots of different dishes.

Berries are abundant in summer and are dried for year-round use.  So, expect summer dishes to feature strawberry and blackberry.  And keep your eye out for the less common sea buckthorn and cranberries.  And of course, some of those berries make their way into Kachka’s own line of infused vodkas.

Let’s not forget the drinks

Drinks are actually considered a course in Russian cuisine.  As mentioned above, vodka is the alcoholic drink of choice and Kachka’s selection is the broadest in Portland.  The horseradish infused vodka is their most popular.  And non-alcoholic drinks include teas, kompot (fresh fruit steeped punch), kvass (lacto fermented bread soda) and house made tarragon soda.

Breads.  The grains that grow in Russia are the heartier type – rye, wheat, barley.  These can be crafted into all sort of goodies from blinis to pumpernickel bread.  You can also pick up a loaf of house made bread from the deli upstairs, Latva.  Check out the challah (a brioche style bread) or the borodinsky (traditional black bread with coriander).  And Latva is good to remember, if you are ever in the grab and go mood.

What do Russians eat for dessert?

And let’s finish with desserts.  Because, as with so many cultures, that’s how people from Russia prefer to finish a meal.  Zephyr is akin to a marshmallow and Kachka has an apple flavored one.  Pirozhki is a pastry dough with a filling.  Syrniki are fried curd fritters served with a sweet accompaniment.  Kachka has cherry pelemis, if you didn’t eat enough dumplings in the rest of your meal.  Bonnie’s childhood favorite is oreshki, a caramel filled butter cookie.  And there is never a bad day for ice cream, which you will find on the menu as plombir.

I hope I have piqued your interest in Russian cuisine!  Going to Kachka is more than just about the food, although that is certainly reason enough to go.  But stepping into Kachka and immersing yourself in the atmosphere, down to the nesting dolls tablecloth, Russian style teapots and a wall displaying the vast selection of vodka brings the entire experience to life.  If it sounds intriguing, please come join me on the Bustling Buckman Tour.