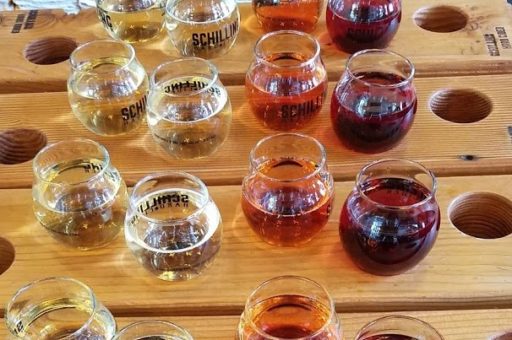 Fermenting apples and apple juice into hard cider carries an air of mystique amongst so many of us.  It seems like it is difficult and elusive and complicated.  I am happy to tell you it is none of those.  Although as a disclaimer, getting consistent fermentation results on a large-scale basis and running a business IS difficult and complicated.

But for the lay person, fermenting cider at home is basically like cooking.  Although instead of using the stove or oven to cook apples, you are using a glass container to house apple juice and yeast for a few months.

For years, I made beer, wine, mead, and cider at home.  I did a lot of grain free, hop free, herbal beers.  Which some could argue are not really beer in the strictest sense.  However, I am not fond of the hoppy flavor or the heavy feeling from drinking traditional beer.  For years, I held off with making wine, because it took a whole year to mature.

Although after some years I pointed out to myself “you plan on being alive in a year, so why not make some wine and forget about it and in a year, you’ll have it.”  Mead was happening when I was keeping bees and had honey galore.  Like wine, it took a year to mature.  And cider was really a nice in between of the two.  It is gluten free, so that appealed to me as well.  And it matures in a lot less time than wine does, so that appealed to me as well.  So, what do you need to get started?

You will need to go to a fermentation store to get some basic equipment.  A carboy (glass container), an airlock, a stopper and siphon hose, campdem tablets (to inhibit growth of wild yeast), and yeast, preferably champagne yeast.  A popular fermentation shop in Portland is F.H. Steinhart Co. and you should be able to get started for around $60.  Also, people who work at fermentation shops are very eager to help you make your endeavor a success, so you should utilize their knowledge.  The rest of what is needed are things that you’ll have in your kitchen already.

You will need apple cider or apple juice.  Apple cider is the unprocessed juice from the apples.  It is not filtered, nor heated, and it will start to ferment on its own.  If you find it has an effervescent quality, that means it has started undergoing fermentation.  Apple juice is the expressed juice from the apples, that has then been filtered and pasteurized.  This makes it very stable and it can sit in a jar indefinitely, until it is opened.  At that point, it needs to be consumed in a week or so.

Since apple cider is less processed, it would be my go-to for making hard cider.  In the autumn, it is abundant and inexpensive.  If you have a friend with a cider press, that is even better.  Sometimes people with a press network in permaculture circles.  Perhaps they need help with harvesting their apples and then you can get some cider out of the deal.  However, if you prefer to experiment with apple juice, that is a totally legitimate way to go.  The yeast is just not that picky!

In general, I am not a sterilization freak in the kitchen and, in fact, I am pretty much the opposite of that.  But for beer, wine, mead and hard cider, you need to sterilize your equipment, otherwise the less desirable yeasts and bacteria will flourish and the flavors will be off.  The product won’t be dangerous to consume, but it won’t taste appealing (although you can still bathe with it before dumping it down the drain).

I prefer to use a very dilute bleach solution to sterilize my equipment.  Fermentation shops have a non-bleach sterilizing product as well, if you want to experiment.  So, use your kitchen sink and let the carboy, airlock, stopper and funnel sit for ten minutes so the bleach can do its job.

Empty the carboy and funnel the apple cider in.  Crush the campdem tablet and add it to the carboy, it will kill the yeasts, which will allow the introduced yeast to thrive.  Add the packet of champagne yeast to the carboy, and then seal the carboy with the stopper and put the airlock (with water in it) on top.  The airlock has a lid so nothing can enter the carboy.

If you want to add herbs, spice or other fruit, this is when you would do that.  The permutations are literally endless.  Although for a first go around, I would suggest just using apple cider.  That way you are building a foundation and from there, you can further experiment.

Shake and put the carboy on your kitchen table or somewhere where you can admire it!  In a few hours and for a couple days you will see lots of fermentation happening.  I find it mesmerizing, like a camp fire and I love to gather around the carboy in the evening and stare at the rising bubbles.

After a couple days, the profusion of bubbles will subside.  There may even be sediment in the juice that works its way out through the airlock.  If this has happened, I just wipe down the carboy and clean out the airlock and fill it with clean water.

The magic of fermentation – apple cider into hard cider

Now stick the carboy somewhere cool.  A basement or cellar is ideal, although I never had one.  So, I stuck it in a closet in a room I didn’t heat.  You can check on it, or ignore it.  I believe that the energy you put in, you will get out.  So, I prefer to check on it weekly.  But if you are busy, or forget, no worries.  The cider does not hold grudges.

Over time, you will see a sediment accumulate on the bottom on the carboy.  This is the dead yeast.  The yeast ate the sugar in the cider and eventually died.  When the alcohol level reaches a certain point, all the yeast will die.  As it has a range and limit of what it can tolerate.  Different yeasts can tolerate different amounts of alcohol.  This may be a month or a few months.  Honestly, for the home brewer, it does not make all that much difference, so if you are unsure, just err on the side of waiting.  What you don’t want, is cider still fermenting in your bottles.  Because they could explode, which makes a huge mess, not to mention spewing shrapnel throughout your home (personal experience speaking here).

An apple a day just got interesting. Now whomever thought of this is very witty!

Now it is time to sterilize your wine or beer bottles and siphon in a bleach solution.  I like to put a stopper in the kitchen sink and fill it with water, add a splash of bleach, and then fill the bottles and let them sit on the counter for ten minutes.  Finally, I pour it out and rinse with clean water.  Then you are ready to siphon in the cider.  I like to put the carboy back on the kitchen table so I can have gravity working in my favor.  Line up the bottles on the floor and get the siphon going.  I always do this with a friend, since I find there are so many moving parts that more than two hands are needed.  Make sure to keep the siphon above the dead yeast.  This way, only the clear cider will make its way into the bottles.

Cap or cork them, label them, put them in a box and put them back in the cool place.

So, that’s the basics of making hard cider in your own kitchen.  See, it’s not all that hard!

Well, as much as Portland is known as a beer town and a wine town, it is also a cider town.  The Pacific Northwest is a natural for hard cider.  To an apple tree, Oregon is the Garden of Eden.  So, apples and apple cider are abundant here.  Plus, Oregonians love artisanal products, and small scale cideries fall into that category.

On the Bustling Buckman Food Tour, we visit Schilling Cider House, which has 50 ciders on tap at any point in time.  They strive to have the most eclectic and diverse cider selection in the world!  The only constant, is that they will have ten or so ciders that they craft themselves.  The other 40 come from other small-scale producers.  Some from Portland, a lot from the west coast, and a handful from other parts of the US and another handful from Europe.

So, our visit to Schilling Cider House takes things to a whole other level with so many types of cider.  From dry, to semi dry, to semi sweet to sweet, it is hard to imagine they all started out from the same stock.  Different strains of yeast impart different flavors, which is very interesting.  Apples vary in tannic levels.  And the cider brewer can get super creative with the addition of spices, herbs and other fruit varieties.

Although each hard cider that we taste, is still reminiscent of its roots, or in this case, its fruit.  Apples!