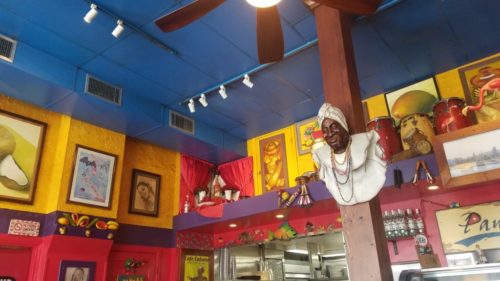 Pambiche is on the ground floor of a three story building and the entire building is painted in bright purple, green, yellow, and pink, with a mural depicting Cuban life on the east side of the Apamicho buildling.  The inside is very bright and cheery as well.  With the dreary winter days, it is very inviting to sit inside Pambiche and immediately be transported to Havana.  This is part of what makes it such a fun restaurant to eat in Portland, Oregon. And why I include it in our Portland food tours.

It’s also almost always bustling with people, which is generally a reliable sign of good food.  In fact, it’s not unusual to need to wait to get a seat at the cozy restaurant.  However, in the warmer months, seating is expanded with outdoor tables under a sidewalk arcade.  Eating al fresco is definitely reminiscent of my travels to Latin America.

It is not common knowledge that Cuban food is more closely related to Creole and Puerto Rican and Spanish cuisine, than Mexican cuisine.  It is like a tropical form of Spanish, think tropical roots like yuca and taro.

So What Should I Order at Pambiche – a Slice of Old Havana?

The menu informs you empanadas will take about fifteen minutes. This is because they are homemade with leaf lard and I will tell you, they are surely worth the wait.  If you cannot decide between the beef, the chicken or the cheese ones – then order all three and split them with a friend!

The salads are super fresh and brightly colored.  As an example, an empanada and a beet salad and/or cabbage salad could easily complete a lunch, if you were going light.  And if you are in the mood for something more substantial, there are plenty of entrees to choose from.  Think braised meats and stewed veggies, with a side of the traditional beans and rice (or is that rice and beans?).  The camarones (shrimp) and pollo (chicken) are delicious.

And the more adventurous eater may opt for oxtail on fire, or ajiaco, which is considered to be the national dish and is heavy with Cuban roots such as malanga and yuca.  I love the green and red sauces that grace every table.  They are not spicy, but pack a punch in the flavor department.

On the Vibrant Kerns Hood Food Tour, we start off with these delicious and west coast sourced salads. My favorite is the ensalada de remolacha.

Many moons ago, I indulged in Pambiche’s version of a Cuban cigar.  It is described as a dense chocolate rum truffle cake rolled in the shape of a Cuban cigar and covered in dark chocolate and cocoa. Served with strawberry Daiquiri Salsa and macaroon coconut.  Hey, you only live once!

Oh, and what about a café Cubano?  A Cuban meal wouldn’t be considered complete without it.  It is typically served very sweet, but they put the sugar on the side.  And even better, it is served with a stick of sugar cane, which is used as a stirring stick, and you can also chew on it.  And some tonic water to wash it
down.  This is the Cuban way.

Pambiche – a slice of old Havana is a hip eatery reliably serving up colorful and well prepared Cuban food crafted from high quality ingredients —some are organic, free range eggs, local flour.  For some reason I prefer to walk up and take my chances for grabbing a seat right away.  Maybe that just preserves the wonderful informality of the place.  Thus, the food is prepared with love and that comes through in all aspects of the Pambiche.
experience.