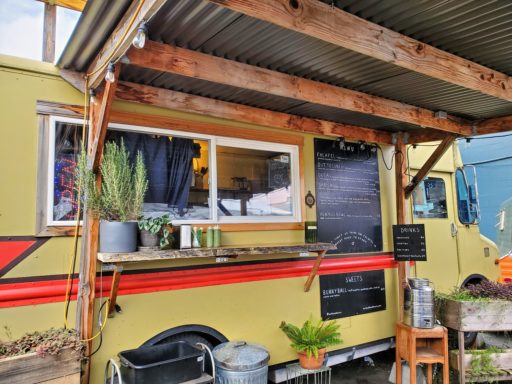 We visit Wolf and Bear’s on the Vibrant Kerns Hood Food Tour.  The food is great and visitors to our fair city love to experience the food cart pod scene, which we tend to take for granted since we live here.  I will tell you, I was sad when Tapalaya closed down, since more times than not it was guests’ favorite stop on the tour.  I knew I needed to find another eatery that would have the desired WOW factor.  And in short order, guests were telling me Wolf and Bear’s was their favorite stop.  Phew!

So what is falafel anyway?

Falafel is a Middle Eastern dish, which is centered around deep-fried chickpeas mashed with spices. It is served alongside some raw veggies and drizzled with a tahini sauce (sesame butter), wrapped in pita bread.

And why the fuss about this humble dish?

Well, as is the case with most things, the WAY things are done ends up making all the difference.  There is a lot to be said for paying attention to the details.  And this is where Wolf and Bear’s has nailed it, several times over.  Let’s examine the delicious elements.

This is the real crux of the matter.  Fried food is yummy, but it can all taste, well, fried.  Sometimes the flavor of the ingredients themselves are lost.  Well, when Jeremy and Tanna started Wolf and Bear’s in 2009, they knew they wanted to sell food healthy enough that you could eat it every day.

So instead of deep frying the chickpea mash, they sprout the chickpeas, then mash them with assorted herbs and bake them in the oven.  Then they pan fry them in a just a little bit of oil to order.  So they are charred on the outside yet still totally wholesome and fresh tasting.

Sprouted, then baked, the pan fried – now that’s the ticket!

Raw veggies can be delicious, at the very, very peak of ripeness.  But truth be known, roasted vegetables are far more nutritious and have FAR more flavor than their raw counterparts.  Just envision a slice of raw red bell pepper versus a roasted pepper.  No contest.

This falafel sandwich has a healthy portion of grilled onions, roasted red pepper, and eggplant.  And voila, it transports you to the Mediterranean, even on a cool, Oregon day.

I don’t think I need to say anything more than that warm bread and cold bread are not even to be mentioned in the same sentence (although I just did).  I like to feel the warmth of the wrap in my hands and even more so, in my tummy.

Everything is made in house at Wolf and Bear’s.  The hummus, the labnah (Middle Eastern yogurt cheese) and of course, their tahini sauce which is generously drizzled over the falafel.  The sesame butter compliments the chickpeas, both in flavor and in creating a complete protein.  And their tahini sauce is well executed, in terms of being slightly acidic.

And Wolf and Bear’s secret sauce

The zhug!  Which is Yemen’s own hot sauce.  Both Jeremy and Tanna love food with a little heat, and so coming up with a killer hot sauce to complement all their dishes was a must do for them.  It is cilantro based and has some additional spices and chile, all blended into a vinaigrette.  Yet it remains green and thick.

To give their customers a choice the zhug is on the side in a squirt bottle.  So people can moderate the heat level to suit themselves.  For me, adding a dab (or a big squirt) is the proverbial icing on the cake.

It is no surprise that there are often people standing in line to get their falafel fix.  You can also call or text in your order so it is ready when you arrive.  Which is exactly what we do on the Portland Food Tour.