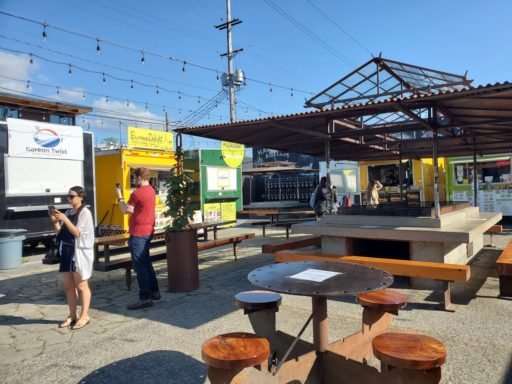 I will admit, I hesitate to write this article, because what could I possibly say about food carts in Portland that has not already been said?  Probably nothing, but it has been fun for me to travel down some rabbit holes, learning the history of how food carts have become synonymous with Portland.

Officially, the food cart scene blew up in 2008, during the Great Recession. Although that was 95 years after the first food cart set up moveable shop in Portland.  As you can imagine, the cart was pulled by a horse back then!

The food carts in Portland have century old history!

This picture, compliments of the University of Oregon gives the timeline for Portland and its beloved food carts.

In brief, most of the 20th century saw few food carts, yet they existed.  By 2000, there were appearing more frequently downtown, close to 175.  And like spokes on a wheel, they spread out to other neighborhoods and across the river.

When the recession hit in 2007, food carts boomed.  This may seem counter intuitive.  However, consider that even in times of duress people still love to eat out and support local foodie creatives.  Furthermore, a lot of unemployed people tapped into their inner entrepreneur and found that starting a food cart was a lot more attainable than starting a brick and mortar restaurant.  Then it all makes perfect sense.  If fact, it was during this time that the number grew to 450 carts.  Nice!  While there were multiple factors at play, the burgeoning food cart scene is in part what helped bring vitality and revive Portland after the recession.

Also, the licensing fees are affordable, compared to other cities.  So, this makes for a low barrier to entry, much to our delight.  Interesting to note, and I think it is a good thing, the food cart owners have a huge range in their background culinary experiences.  Lots of owners were fabulous home cooks, excited to share their favorite family or cultural recipes with the world.  Some have worked in the restaurant industry for years and this is their first step branching out on their own.  Other owners dream of owning a brick and mortar restaurant someday and they are getting their feet wet running a food cart.  And in Portland, some have formerly worked at Michelin starred restaurants and they later decided they really wanted to go casual.

With 600+ the food carts in Portland have become iconic

Fast forward another decade and Portland currently has somewhere around 600 food carts in operation.  Wow!  Unlike some cities, where the carts are on the sidewalk and are removed each evening, Portland’s food carts are larger in size and more permanent in nature.  They are required to have the ability to move, although once they are in a pod, they stay there for a while.  For the most part, I see relatively low turnover.  Carts often stay in the same spot for years.  Although through the year, there may be a cart or two that leaves the pod and a new one takes their place.

So many food carts translates to so much culinary diversity

I view the Portland food scene as super creative.  I don’t believe that chefs are trying to one up each other with who has the most innovative dishes.  I simply think chefs are inspired by other chefs’ dishes and use this creativity to spur their own.  I can attest to the fact that it’s awesome to live in a place where the bar is so high and foodie innovation flourishes.  This plays out in both the restaurants and the food carts.

To me, the best part of having so many food carts is the great diversity in cuisine.  It would be very easy to feel like you’ve traveled around the world eating, while staying in a one block radius.  And a lot less hassle than a long plane ride.

There are four classifications of the levels of food preparation that can be served from a food cart.  The first level is prepacked food and beverages.  The second level is unpackaged food items that were prepared and cooked elsewhere.  The third level is a full menu except for dishes that involve meat or eggs cooked on site.  And the fourth category is a full menu cooked on site with no ingredient limitations.

Now, I have only been to a fraction of the food carts in Portland, but from what I can tell, they mainly fall into the third and fourth category, although prepacked drinks are commonly available.  This means that most of what you order, is food prepared for you, as opposed to reheating already processed food (like frozen hot dogs and pretzels being warmed in the cart).  This all ties back to the chef’s ability and desire to customize and tinker with menus.

And I would be remiss not to mention that all of this stems from our access to abundant fresh food.  Which is what I cite as my number one reason for putting Portland on the map to start with.  Portland and the west coast are simply unparalleled in this respect.  Combine this with food cart dishes typically costing $8-15 and you have the rare combination of very affordable, organic, and delicious local cuisine.

And these rich offerings make people of all types flock to food carts, especially in the warmer weather.  Downtown, there will be a huge lunch crowd, as people step out of their office and onto the streets.  On the east side, the pods are located in the neighborhoods and the crowds can persist in the evening, as people eat a casual dinner.  And some are open late.  It’s been years, but I will admit to having sugar laden crepes at 2am in the past.  Teenagers, families, couples, business people, and tourists all find something to love about Portland food carts.

Perhaps not at every cart, but within a given pod, lots of different diets are catered to.  Chefs are used to patrons requesting gluten free, vegetarian or vegan.  And many menus are crafted to reflect having options for all of these.  Sandwiches may be served as salads.  Trade in chicken for legumes.  And coconut milk may be just as, or even tastier than cow’s milk.

People wonder if eating at food carts is safe.  Yes!  They are subject to passing health inspections, which is part of the classification and licensing system that I mentioned above.   So, they are as safe as eating at restaurants.  Do not hold back because of a fear of lack of hygiene.

The food cart pods are an ever-changing landscape

The earlier food cart pods downtown are often small food trucks, facing outside, toward the sidewalk.  And many of them comprise a pod.  The most famous pod, the one that started it all, the Alder St pod had upwards of 65 trucks.  In a twist of irony, it was shut down in the summer of 2019 to make room for a Ritz Carlton Hotel.  It would become a place to house people who are coming to see what is disappearing.

Although it’s not all gloom and doom.  Pods are fluid and there are new ones opening up.  Or moving.  The pods have migrated to the east side in higher concentration where real estate is less expensive.  And instead of dedicating a whole block to a pod, sometimes a fraction of a block, or part of a parking lot is set aside.  Which can still hold 8-20 carts.  Often, the east side pods have bigger carts, many of which are quite artistic in and of themselves.  And they face inward, where a patio setting is in place.  Fire pits, wooden tables, covered areas.

The pods have spread to the greater metro area and beyond

The food cart pod culture extends past Portland city limits and into the metro area.  So, if you live or work (or get hungry when you are traveling) in the suburbs, there are plenty of food cart pods from Beaverton to Gresham to Vancouver, WA.

There are so many food cart pods in Portland that I wish there was one place that listed where they all are, but I am not aware of an up-to-date list.  For a filtered view, PDX Eater publishes an article on the best food carts in Portland every year.  I will be honest with you, the list is short and in reality, there are a lot of delicious options.  But check out the list for fun, and then pick a food cart pod to go with some family or friends and try a few different things that call to you.

I make sure to visit a food cart pod on every food tour we offer.  For a lot of out of town guests they are a novelty.  The food and drink served there are as enjoyed as much as at the other stops.  And mostly, I love for people to get a taste of the quintessential Portland food cart pod scene.  The pods are undeniably fun just to hang and wander in.

On the Vibrant Kerns Hood food tour we stop at Pod28 to sample Wolf and Bear’s baked, not fried falafel.  On the Bustling Buckman food tour we stop at Hawthorne Asylum to have dessert at Smaaken Waffle.  And on the Brunch on Mississippi food tour, we stop at Prost Marketplace to sample libations at Bloodbuzz.  Why don’t you come join us for one of these unique Portland foodie experiences?